Top-of-the-line bike computers typically provide the largest sized screens, but this isn't to make them more immersive, it's the opposite. The larger screen lets you see the information you need quickly and return to paying full attention to riding — no squinting required. With the introduction of the new Edge 1030 Plus, Garmin has dramatically updated their top-end unit, so we wanted to examine exactly what has changed.

The physical design of the outgoing Edge 1030, which was announced back in 2017, is largely the same. This is likely why this is a "Plus" model, as opposed to being completely new. However, while the name and the physical design are similar, there are many meaningful updates that make this a major upgrade. The most obvious cosmetic change is that the 1030 Plus now has a black body, as opposed to the white 1030. 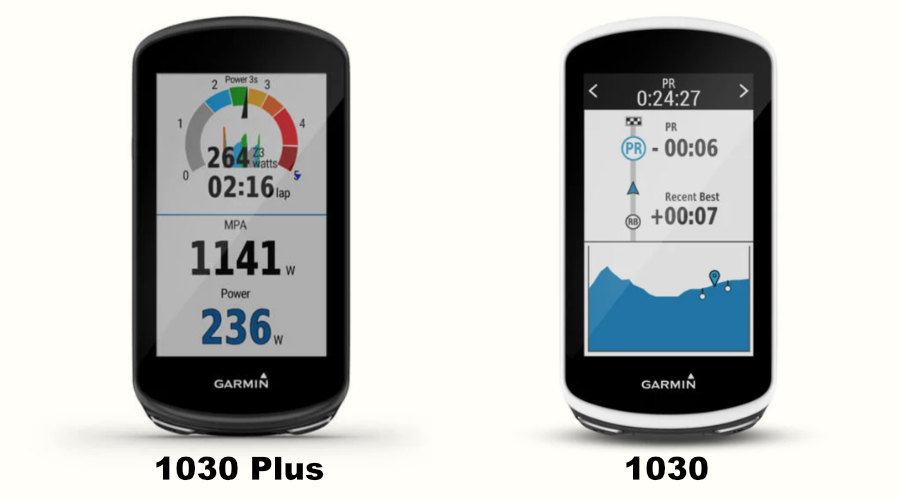 The majority of the changes to the Garmin Edge 1030 Plus take place under its exterior. The buttons are in the same place as the original 1030, and the screen is the same size, but the responsiveness of the screen has been greatly improved. This is because the processor hardware of the 1030 Plus has been upgraded, and the touchscreen display is substantially better as well.

The idea of having a touchscreen display on a bike computer is appealing, but only if it operates reliably. This was a point of frustration with the original Edge 1030 and Edge 820 bike computers; their touch displays were just too slow. When the updated Garmin Edge 830 was released last year, this story changed. The faster processor and more responsive touch display greatly improved the usability of the device. Similar improvements have now landed on the Edge 1030 Plus, and it's something you'll appreciate every time you use it. The touchscreen also works impressively well in rain and with gloved fingers.

Another way you'll notice the faster processing is when you're using the extensive navigation features. The new 1030 Plus can calculate routes much more quickly than the old Edge 1030. When you head off-course, an array of excellent new routing features kick-in showcasing the extra processing muscle once again.

When you're riding a course you've chosen and decide to make an unplanned turn to explore something interesting, take a rest at a cafe, or if you legitimately missed a turn, the new Edge 1030 Plus presents you with four options: Pause Navigation, Rejoin Route, Skip Ahead, and Cut Across. 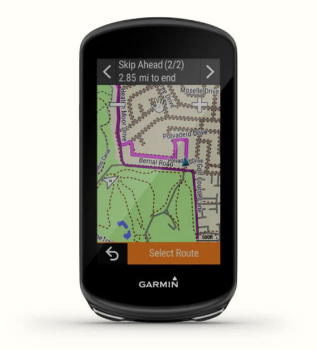 Pause Navigation: When you veer off-course, it doesn't mean you want to stop recording your workout. There's a physical Pause button on the Edge 1030 Plus, but pressing it will stop your fitness tracking, which you may not want to do. That's why the new Pause Navigation option is so useful. Select it, continue pedaling where you want to go, and record all of your metrics along the way.

Rejoin Route: This option does exactly what you think it does: it gets you back to your planned route where you left off. This way you can complete the entire ride you had planned. This option is best for wrong turns and short detours.

Skip Ahead: When you go off-course and decide that doing the entire original course you had planned isn't the most appealing option, the new Skip Ahead feature will route you to a later point in the course.

Cut Across: There are times when getting back to your starting point as quickly as possible is the most desirable option. Perhaps the weather has turned, or you're needed at home, etc. The new Cut Across feature will cut the course to get you back ASAP. Using this option in races is not recommended.

Mapping and navigation are huge selling points for this device, and Garmin has improved them by including multiple map sets with the unit. For example, when you buy a 1030 Plus in the USA, it comes preloaded with maps for North America and Europe. Its built-in memory has been doubled to 32GB, and you can easily add more maps by connecting it to your computer. The additional maps can be loaded with the Garmin Express application, they're free, and they include Garmin's Popularity Trendline heatmap routing. The original 1030 featured a micro-SD card slot to expand the memory. This has been removed on the 1030 Plus, but should be unnecessary now that the built-in memory is larger.

If you're moving to the Edge 1030 Plus from another Garmin device, the set-up process has been greatly improved. You can now transfer all of your data screens and connected sensors without needing to start over from scratch. These features will also be coming to the Edge 530 and Edge 830 later this year.

Suggested workout: This is the first Garmin device that looks at your current fitness and recovery levels and suggests a workout based on this data.

Improved LiveTracking: Garmin devices have had live-tracking for a long time, but it hasn't worked reliably. The new Edge 1030 Plus has improved in this area, and it even shares your planned route with the people you send it to. These features will also be coming to the Edge 530 and 830.

Improved Speaker: The familiar beeps and chimes from the Garmin 1030 Plus are significantly louder and clearer sounding.

Mountain biking features: The Edge 1030 Plus comes pre-loaded with the Trailforks app and trail data sets, ForkSight navigation, plus a set of sport-specific metrics like jump data and others.

The Garmin Edge 1030 Plus is a top-of-the-line unit, and it's filled to the brim with features. It's got all of the capabilities of the Edge 830, including ClimbPro, Heat and Altitude Acclimation, external battery support, crash detection, a built-in bike alarm and more. The battery life is improved, and it's just a better unit all around. It's also fully compatible with Garmin Varia radar systems, and you can later analyze this traffic data in SportTracks. The built-in WiFi on the 1030 Plus will sync your ride data the moment you get home, and it will be seamlessly auto-synced to SportTracks as well.

All in all, this is a compelling update, and makes Garmin's large-screen bike computer more appealing than ever.

Analyze vehicle data with your cycling performance metrics
What makes the Garmin 830 different from the 530?
Garmin's most popular bike computer gets a big update
Get SportTracks
Plan. Track. Analyze. Share.
All in one place.
Sign up